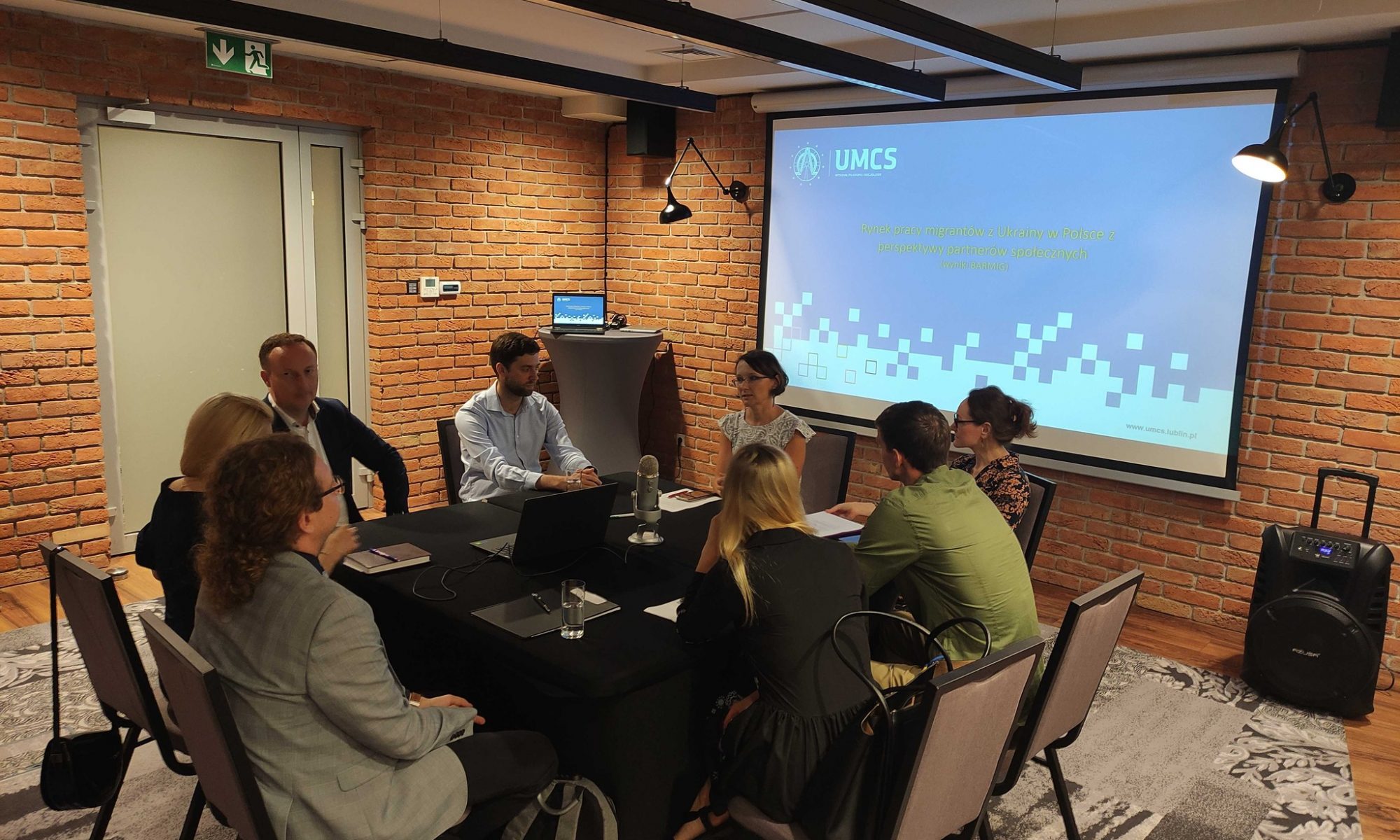 On July 28, an additional expert seminar “Employees from Ukraine on the Polish labor market before and after the outbreak of the war – diagnosis, challenges, recommendations” was held by Polish team in Lublin as part of the BARMIG project. Because of the extraordinary situation connected with the huge inflow of Ukrainians in last months we decided to organize the meeting with local representatives of institutions related to the labour market, carrying out activities for the benefit of migrant workers.

The first part of the meeting was a presentation of the results of the BARMIG project and an expert commentary on the presented information. In the second part of the meeting, a group discussion with experts was conducted by Karolina Podgórska, PhD and Andrzej Jekaterynczuk, PhD from the Migration Research Team of the Institute of Sociology, focused on current events related to the influx of refugees from Ukraine and their presence on the local (and national) labour market, and in particular the challenges related to these processes. We discussed about the structure of new migration wave, the character of new labour market challenges, as well as about the recommendations for labour market stakeholders to better cope with current and future challenges.

Our colleagues from the Polish team, Dominika Polkowska and Karolina Podgórska, took part in the 19th IMISCOE Network Annual Conference Migration and Time: Temporalities of Mobility, Governance, and Resistance which was held in Oslo, Norway.

They presented the BARMIG project findings in the session chaired by Professor Rinnus Penninx. The presentation was titled: Labour market of Ukrainian migrant workers in Poland from the perspective of social partners: challenges and threats.

On May 19-20, 2022, the international conference “Social Boundaries of Work” was held. The conference was attended by members of the BARMIG project from UMCS, CELSI, IRMO and UT.

The final conference ending the BARMIG project took place from March 31 to April 1.

Due to the situation in Central and Eastern Europe related to the war in the Ukraine and the migration crisis, the event was held online.

During the conference, the results of the project regarding the employment of economic migrants and the role of social partners in this process in the countries of Central and Eastern Europe were summarized. The discussion was attended by experts and representatives of social partners from the Czech Republic, Hungary, Slovakia, Estonia, Croatia and Poland.

Up to 60 participants followed the discussion during the conference.

We would like to remind you that the website contains policy briefs and executive summaries prepared by our teams in the national languages of all 6 project countries and in English.

More information and a recording from the meeting in the Expert Workshop tab.

We are pleased to announce that the researchers in the Barmig project have completed the country reports.

We invite you to read their content on the following page:

Each BARMIG research team organized a webinar about labor migrants in December 2021. CELSI organized two separate webinars (one for Hungary and one for the Czech Republic). Within webinars the team leader presented main findings of the national report with the particular attention targeted towards situation of migrant workers within the digital economy. Participants of the webinars was social partners, policy makers and other stakeholder at the national level. All webinars was in local language to facilitate communication with the national stakeholders. All webinars was recorded. You can see all the recordings HERE

On October 18-19, 2021, another research meeting was held in Tartu, Estonia. Due to COVID19 restrictions the meeting again took place online. The main aim of this meeting was to summarize the results of research carried out in each country and to discuss with the evaluator prof. Nathan Lillie. The main emphasis was placed on identifying similarities and differences regarding the social partners’ view of migrants work in different sectors.

On September 16-18, two researchers from UMCS – dr Karolina Podgórska and dr Dominika Polkowska participated in the scientific conference organised by the Committee on Migration Research of Polish Academy of Science (KBnM PAN) and University of Gdansk. They have presented the initial results of the polish case study. The title of the presentation was: The labour market of Ukrainian migrants in Poland from the social partners` perspective.

The BARMIG project is a project co-financed by the Directorate General for Employment, Social Affairs and Inclusion of the European Commission.